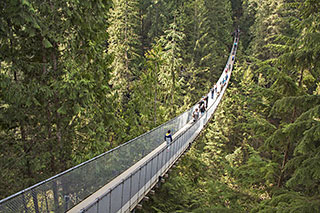 Capilano Suspension Bridge
Vancouver's first tourist attraction opened in 1889 and has been thrilling visitors with its swaying bridge over a plummeting canyon ever since. The footbridge spans a 70-meter deep river canyon leading to an activity park filled with forest trails and a treetop walk through old-growth giants. There's also a collection of totem poles and a transparent suspended platform known as the Cliffwalk. If you are staying in Vancouver, the Capilano Suspension Bridge, with a free shuttle to the site, is a convenient option. The shuttle runs from downtown Vancouver, and the ticket covers admission to the Capilano Suspension Bridge, including the TreeTops Adventure and the Cliffwalk.
Address: 3735 Capilano Rd
www.capbridge.com 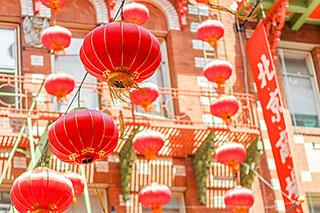 Chinatown
Beyond the ornate Millennium Gate marking its entrance, Vancouver's exotic and interesting Chinatown features modern buildings amid many older ones dating from Victorian times. Signs at shops and restaurants are often written in Chinese characters. Local attractions include the pretty walled Dr. Sun Yat-Sen Classical Chinese Garden, modeled after a traditional garden from the Ming Dynasty. Also worth seeing is the Sam Kee Building, which at barely two meters wide claims to be the narrowest office building in the world. 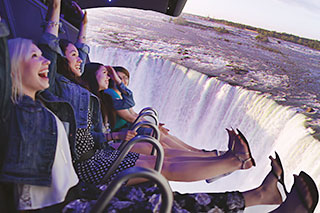 FlyOver Canada
See Canada like never before at Vancouver's must-see attraction! Soar from coast to coast across some of Canada's most spectacular sights with the latest in-flight ride technology. Wind, scents and other amazing effects will make you feel like you are truly flying. Open daily from 10 am - 9 pm in downtown Vancouver at Canada Place. The complete FlyOver Canada experience lasts approximately 25 minutes. Your journey begins with UpLift!, an inspiring audio-visual pre-show that gets you ready for the flight. Next, you will head to the boarding zone, where flight guides will prepare you to embark on the ultimate flying ride.
www.flyovercanada.com 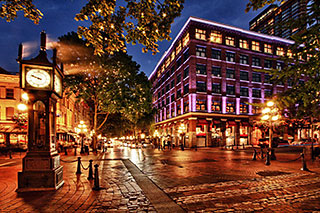 Gastown
The oldest part of the city, Gastown is an area of restaurants, galleries, and shops set in carefully restored Victorian buildings. Heritage structures, cobblestone streets, and iron lampposts give the district its distinctive atmosphere. Gastown came into existence in 1867 when a man called John Deighton arrived on the scene. Deighton had a habit of launching into lengthy stories and soon acquired the nickname "Gassy Jack." As a result, the vicinity became known as "Gassy's Town" or "Gastown". A statue of the proprietor now watches over the neighborhood in Maple Tree Square. Stop for photos with Gassy Jack, and visit the nearby Steam Clock, which puffs steam-powered chimes every 15 minutes.
Location: Downtown Eastside

Granville Island
Once mainly industrial, Granville Island is now a thriving center of activity. Artists and retailers have moved into converted warehouses alongside houseboats, theaters, galleries, and restaurants. The Granville Island Public Market is one of the most popular attractions selling fruit, vegetables, seafood, and a great variety of other specialties as well as ready-to-eat items. Not truly an island, the arts hub is linked to residential areas by one road and footbridges to the south, and to the Downtown peninsula (across False Creek) by ferry.
Location: South of the Granville Street Bridge
www.granvilleisland.com 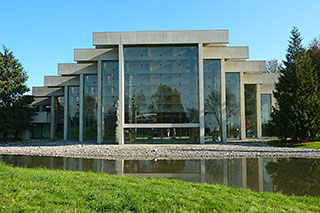 Museum of Anthropology
Part of the University of British Columbia, the Museum of Anthropology deals with cultures from around the world, but places particular emphasis on British Columbia First Nations. Exhibits display native art, including large totem poles in the Great Hall. Other presentations explore ethnographic and archaeological objects representing Asia, the South Pacific, the Americas, Africa and Europe. The building was originally part of a WWII-era fort, and local architect Arthur Erickson transformed the spaces into this world-class museum.
Other attractions on the university campus include the natural-history-focused Beaty Biodiversity Museum and the UBC Botanical Garden with its many interesting plantings and delicate Nitobe Japanese Garden.
Hours: Daily 10am-5pm (until 9pm on Tuesday)
Address: 6393 NW Marine Drive
moa.ubc.ca 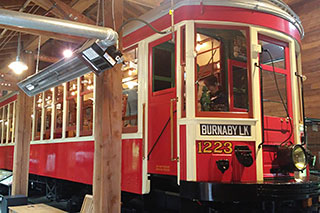 Museum of Vancouver
In Vanier Park near Burrard Bridge, the Museum of Vancouver is a large institution devoted to all things Vancouver. It covers the city history from the first Coast Salish communities to Japantown, Kitsilano hippie days, and urban development. Other worthwhile museums and centers are within a short walk, including the HR MacMillan Space Centre with its planetarium and observatory. There is also the waterfront Maritime Museum, where fantastic views capture English Bay with the North Shore mountains beyond.
Hours: Open daily 10am-5pm (until 8pm Thursday)
Address: 1100 Chestnut Street
www.museumofvancouver.ca 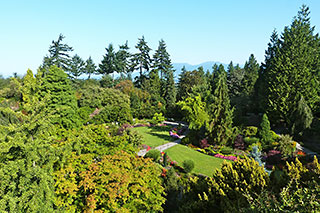 Queen Elizabeth Park
The center of Queen Elizabeth Park, Little Mountain, marks the highest point in Vancouver and its elevated position affords excellent views of the city center and the mountains to the north. The park has recreational offerings, dining (at Seasons in the Park Restaurant), an extensive outdoor arboretum, and the lovely enclosed tropical environment of Bloedel Conservatory. The sunken Quarry Garden makes a lovely spot to stroll on a warm summer day. For more horticultural explorations, head a couple of blocks west to VanDusen Botanical Garden, where there is always something in bloom amid beds representing various regions and species.
Location: Cambie Street and West 33rd Ave 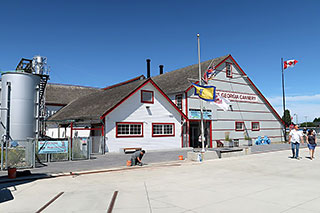 Richmond
This airport locale is packed with sightseeing attractions, from a renowned Buddhist temple to the picturesque former fishing village of Steveston (filled with waterfront restaurants and restored old boatsheds). Located in the latter, the Gulf of Georgia Cannery National Historic Site is one of the most historic settings in Richmond, and it relays the history of the West Coast fishing industry. Many also visit Richmond simply to shop due to its large malls with imported Asian goods.
Location: Lulu Island 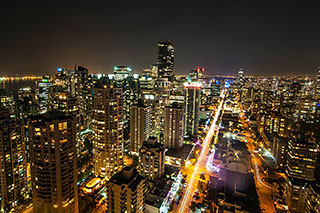 Robson Street
Robson Street is best known for shopping, but it's also the setting for many Vancouver happenings. The city's premier arts institution, the Vancouver Art Gallery is on Robson and houses an excellent collection of paintings by artist Emily Carr, as well as visiting international exhibits. The gallery faces Robson Square, an interesting public space designed by Arthur Erickson, which includes a winter ice-skating rink and law courts.
Location: Robson Street at Hornby Street 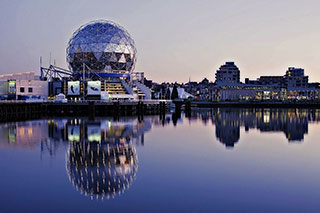 Science World
The futuristic sphere-like building of Science World is home to a kid-friendly exploration center that explains phenomena through hands-on exhibits and demonstrations. Themes include water, air, motion, and invention. There is a theater on-site, as well as a massive IMAX screen. The building, which is an unmistakable waterfront landmark in Vancouver, was originally built for Expo 86, a World's Fair.
Hours: Open daily 10am-6pm (until 9pm Thursday)
Address: 1455 Quebec Street
www.scienceworld.ca 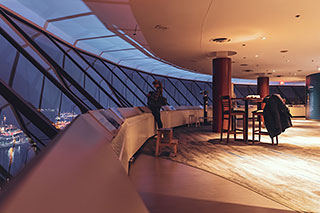 Vancouver Lookout
Vancouver Lookout at Harbor Centre is the best first stop, with a spectacular 360-degree view of Metro Vancouver, the majestic North Shore Mountains and Vancouver Island just off the Pacific Coast. Visitors are whisked from street level to observation deck in an exterior glass elevator. Upon arrival 167 m (548 ft.) above sea level, you are looking down on one of the most beautiful cities in the world. After visiting the Lookout, you will be ready to take in the sights from street level.
Admission tickets valid for same day return.
Location: Harbor Centre
Open 365 days, viewing hours are: Mid-October - April 9:00 am - 9:00 pm
www.vancouverlookout.com 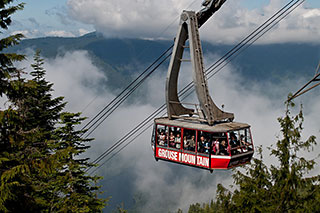 Grouse Mountain Skiing
Just 15 minutes from downtown, Grouse Mountain offers visitors to Vancouver the perfect destination for an afternoon (or evening) of skiing and boarding fun. The terrain is varied enough for all levels of downhill skiers and snowboarders to find their niche, and night skiing is also available. There are also two terrain park zones to try out freestyle moves.
www.grousemountain.com 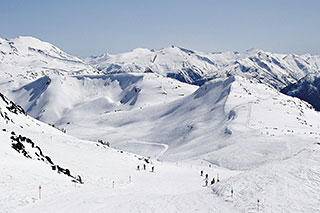 Whistler Blackcomb Skiing
World class skiing is also available just two hours away from Vancouver at the Whistler Blackcomb ski resort, host to many events during the 2010 Olympic Winter Games. With the two largest, #1 ranked, side-by-side ski mountains in North America, Whistler offers skiers and boarders the chance to experience some of the best runs in the world. Visitors are also attracted to the pedestrian village, five-star dining, spas, shopping and nightlife. Several companies offer shuttle services to Whistler Blackcomb.
Stay and Ski Packages
www.whistler.com