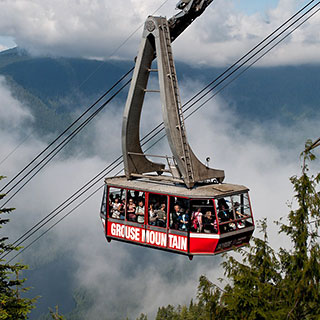 
By Train
Vancouver, BC has an easy to use rapid transit system (metro) for residents and visitors called the Canada Line / SkyTrain.

There are ticket machines inside all Canada Line / SkyTrain stations where you can purchase a ticket using cash, debit or credit cards.


By Car
If you're coming to Vancouver by car, there are a few things you should be aware of. There is no freeway directly into the downtown area, so there is no direct route in, and you will encounter a great deal of local traffic. Parking in downtown can also be difficult, making public transportation the best option.

Car Rental
Vancouver International Airport is well-served by numerous car rental operations located on the first floor near the parking area. Companies operating vehicle pickup and return services on-site at the Vancouver airport include: National /Alamo, Avis, Budget and Hertz/Dollar/Thrifty. Abbotsford International Airport is also served by the above-mentioned car rental companies and they can be found near baggage claim.

Taxis
The taxi ranks are located on Level 2 of the Domestic Terminal and at the arrivals area of the International Terminal. All taxis are metered.

If two or more passengers are going to different places in a zone, the zone rate applies until the first passenger(s) disembark. The meter may only be engaged when the taxi starts moving towards the second destination. Rates do not include gratuities, which are usually 10% of the fare.

There are no app-based transportation companies operating in Vancouver.