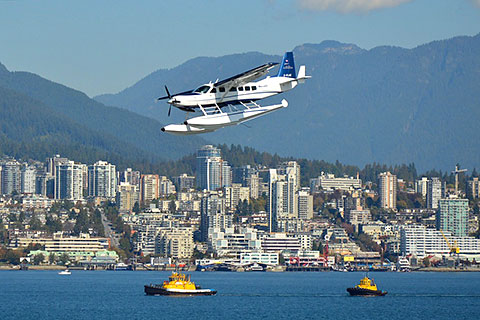 Vancouver is situated in South Western Canada in the province of British Columbia and lies on the coast of the Pacific Ocean where it is sheltered from any extreme weather by Vancouver Island. Known for its amazing scenery, Vancouver is a city which certainly takes advantage of its great location. The Pacific Ocean and the Coastal Mountain range give the city a stunning back drop, and the North Shore Mountain range with ski resorts offers spectacular views back towards the city and beyond. The North Shore also has areas of temperate rain forest, which years ago covered the whole of this area before Vancouver was developed into the city that it is today.

History
Vancouver was named after the British explorer, Captain George Vancouver, who sailed into the area in 1792. However, the region had been inhabited for thousands of years prior to that by Canada's indigenous peoples (now commonly known as First Nations). The city of Vancouver was officially incorporated in 1886 after it had become an important port for shipping lumber out around the world. The first settlement on the downtown peninsula was called Granville, today it is known as the historic Gastown district. When the transcontinental railway arrived in the city a few years later, the population began to boom.

Demographics
Because of Vancouver's position on the Pacific Coast, the city has long attracted immigrants, particularly from Asia. Vancouver actually has one of the most ethnically diverse populations in the world, which is constantly maintained by the thousands of immigrants who come here every year, attracted by the famous quality of life in this city. The population of Vancouver City is nearly 612,000, whilst the Metro area as a whole has a population of over 2 million, making this the third largest city in Canada after Toronto and Montreal.

Language
Vancouver is mainly English-speaking, though due to the city's ethnic diversity, 52% of the city residents have a first language other than English.